He was in 6th place on the all-time likes leaderboards. At one point, he was the highest ranked user, being the first user to reach the rank Ninja; however, he was passed by Pacman87 and a few others.

He mainly posted in the Community Chat Forum, but also occasionally in other forums. He has written two very popular stories: Ninjago: The Epic Rewrite and The Lost Mod, both of which are the second most liked topics in their respective forums, and the latter being the second most liked story of all time. His daily likes record was 664 and his daily posts record was 453. He was temporarily banned in June 2015 along with FrodoLovesBacon for making inappropriate inside jokes in the Secret Sister Society and Undercover Brothers Chat. Although he retired, he still searched his name and checked in on chatrooms occasionally, namely The LMB Coffee Table and WELCOME TO BRICKBOOK! until the boards closed for good.

On May 17, 2013, the mods posted AwesomePythor's interview here.

AwesomePythor started posting on the Ninjago Forum in the Pythor fan club, where he instantly made friends with Samed5 and Ihaveawiixboxds, and then created the Serpentine Fan Club, which became a very popular topic. He rose through the ranks and got to JuniorBuilder.

He then found out about Ninjago stories, and posted on Ninjago Season 100, as well as many others, and made many new friends there. He eventually became a MasterBuilder and created a character known as Schatten, who would go on to become a popular villain around the Ninjago forum. He became friends with Mariothepurpleninja, Samed5, Ihaveawiixboxds, Fastcar700, Lego613master, Bluefire407, and many others.

He eventually wrote a topic called the Awesome story, which became very popular on the MBs, once even being the most viewed Ninjago story until it was passed. After an extended period of activity, he became a Craftsman, and hoped to one day become a Legend, until the update came, preventing him from reaching this goal. He then became an Artisan, and while writing chapter 3 of the Awesome story, he eventually earned a stud, and became Inventor. It was clear that he was becoming much more active than before. Around the same time, ihaveawiixboxds's account was locked, so he announced he was leaving the LEGO Message Boards.

Sometime in late August 2012, AwesomePythor became an Old Timer, placing second in a race to the rank with Samed5 and MariothePurpleNinja. He was in a race to Maniac with the two later on, but only Samed obtained the rank before the update. He started posting in the Community Chat Forum and made many friends there, becoming a semi-popular user. When he first heard about the update, he attempted to reach his sixth stud before the mbs were temporarily closed, but failed. When the update came around, he was not very fond of it for a while, but it eventually grew on him. After the update, AP was the third user to get the rank Knight and Highland Battler, the second to get the rank Forestman, and the first to get the rank Ninja. During 2013, AwesomePythor became (in)famous for his antics on topics like WELCOME TO BRICKBOOK! with Dude777477, who became his best friend on the mbs. In June of that year, he started to become progressively less active before disappearing in April 2014. He did not resume activity until January of the next year.

After many months of extreme activity, AP announced that he would cease posting in July 2015, though he has still searched his name periodically since then. He made numerous brief comebacks following his "retirement," most significantly his return in February 2016, where he reached 50,000 posts. He also came back briefly in November 2015, April 2016, August 2016, November 2016 and December 2016, reaching the rank of Detective in September of that year and Bandit in January 2017. Along with Webkinzbeanie101 and Pacman87, he was promoted to Spaceman on February 23rd, 2017 and Alien on the 27th of that month. After the closing of the message boards was announced, AwesomePythor spent the last month of the site's existence posting actively in Brickbook until it was closed on February 28th, 2017, his 17th birthday.

AwesomePythor was one of the most famous writers on the messageboards, having written many very popular stories such as "Ninjago: The Epic Rewrite," "The Lost Mod" and "Awesome story," the last of which having once been the most viewed story on the Ninjago forum. Although Awesome story was important to his success as an author, he actually considers it one of his worst stories, and to an extent despises it. Despite his popularity, he is rather infamous for not finishing his stories. Other stories he has written are "Pythor's New Story," "Trapped in the Fire Temple," "The skeleton chef," "Child in Time," and "The Spider Man." He is most famous for creating the character Schatten, a black dragon who is the primary villain in many of his stories and who has become very popular on the mbs, with some other Ninjago authors even using him in their stories. His most recent story is a comedy, written in the Community Chat forum. Its title is "Mop AP - An LMB Twilight Zone Spoof," and can be found here. 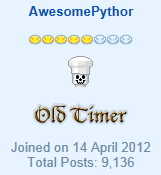 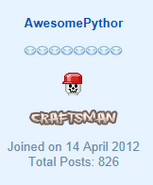 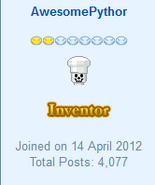 AP's final post
Add a photo to this gallery

This article is great.
Retrieved from "https://legomessageboards.fandom.com/wiki/AwesomePythor?oldid=868651"
Community content is available under CC-BY-SA unless otherwise noted.