< Benboy755
View source
This page is an archive of the old LEGO Message Boards. Feel free to correct mistakes and add information, but please do not update the post count, image, or rank. 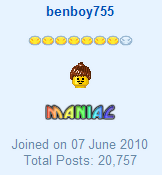 After Goodbye to Friends closed, Benboy755 moved into the LEGO Universe Forum, creating his topic Benboy755(Maya755 in Game) Chatroom, which was locked by WhiteAlligator. He mainly posted in the LEGO Universe Forum, sometimes going to other forums. He slowly ranked up, getting to Inventor in early May 2012. Shortly after he reached Inventor, his friend Felixthunter joined his chatroom, doubling its post rate. Benboy reached Old Timer in early June 2012, and his chatroom reached 500 pages at about the same time. Benboy mainly posted in his chatroom until it was locked when he was 300 posts from Maniac.

He then began posting in Pacman87's chatroom, the Venture League chatroom, and several of his old topics that he revived. Using these topics and the Talk to the Mods topic, Benboy reached Maniac on July 25, 2012. He then mainly posted in Pacman87's chatroom and some topics in the Community Chat Forum and the LEGO Universe Forum. Until his chatroom got unlocked due to the update. Benboy passed Legodurcheinander on August 21, 2012, to claim his 7th stud. At the update, he held the 17th highest post count on the message boards.

He had a signature, but rarely used it: