The Community Chat Forum is a forum that is all about the LEGO Message Boards in general. It is one of the most used forums, and it is where users discuss everything MB related. It was originally called the Message Boards Forum. It is a common place for Chat Topics.

The Community Chat Forum is regarded as the most important forum on the Message Boards, and is one of the most active. It contains help topics, introduction topics for newbies, a departure topic for leaving members, and even a few roleplay topics. It was home to the two largest topics ever on the Message Boards. One of them was Message Boards Achievements, which had 1,626 pages, 24,387 posts, and 116,807 views, making it the largest topic ever at the time, though it was passed by WELCOME TO BRICKBOOK! and many others. It was locked due to excessive spam, but it was reopened with the rest of the locked topics in the The 2012 Update. Now, however, Finding Friendships has taken the top spot in the Community Chat Forum with over 33,380 pages, passing WELCOME TO BRICKBOOK!

Many famous speeches have been posted in different topics in the forum. Some examples are Miakittymoon Thursday SPAM Speech in Talk To The Mods 6, and Ryo-757's retirement speech, in Time off the MB's Speech Podium. At one time, MB Blackboard was also used for shorter and non-retirement speeches. Some of these were posted in news stations, in the LEGO News Forum.

It is also the longest running forum. It has existed since 2001, right when the original Message Boards came out.

It used to have a subforum, LEGO Message Boards Help and Suggestions, but that is now its own forum. Afterwards, the Message Boards Stories Subforum was added, and is currently its only subforum.

The Community Chat Forum has also been known for its spam and duplicate topics, which has caused users to debate it and sometimes to retire over it.

The mods have said that they will change the avatars of the Community Chat logo, and have changed it from lego.minifig and michaelyoda, to TannerJ2598 and Brickgirl99x, and to Diglett809 and Pyangsi10.

There used to be a subforum called "Party and Event Forum" where it held the Mod Party topics, and was locked when the party was over. It was removed on July 16, 2011, and in its place, the Mods added a Help subforum and the Brick Boards subforum. Supposedly they helped to speed up moderation. However, both of those sub-forums were subsequently removed. The Help subforum became its own forum, "Message Board Help and Suggestions", and the topics from the Brick Boards forum were absorbed into the MB sub-forum or the MB Help and Suggestions Forum.

There is a Message Boards Stories Subforum for stories about the message boards and the users on it. 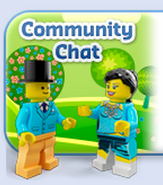 This article is great.
Retrieved from "https://legomessageboards.fandom.com/wiki/Community_Chat_Forum?oldid=867434"
Community content is available under CC-BY-SA unless otherwise noted.