Start a Wiki
This page is an archive of the old LEGO Message Boards. Feel free to correct mistakes and add information, but please do not update the post count, image, or rank. 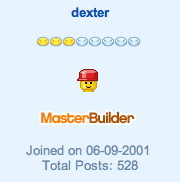 Dexter is a user who took part in the LEGO Message Board's beta testing. He posted frequently in the Mindstorms Forum during beta, but not as much during the finalized Message Boards, which he joined on the first day, September 6, 2001. He stopped posting in 2003, and his account was lost in 2005's Great Migration.

During his time on the Message Boards, he had the rank MasterBuilder, 528 posts, and 3 studs. Not many people remember Dexter because he was last active 10 years ago.

All his posts were lost when the moderators deleted the Archive section of the Mindstorms Forum, the forum which he loved to post in.

He had no signature.

This article is complete.
Retrieved from "https://legomessageboards.fandom.com/wiki/Dexter/Archive?oldid=833468"
Community content is available under CC-BY-SA unless otherwise noted.