Figmentia currently does not have a signature.

Figmentia does not have any badges.

Source: LEGO Message Boards
Figmentia has either deleted their account or their account has been deleted by a moderator
This article is up to date

Figmentia (also known as Figgy) joined the LEGO Message Boards on September 1, 2010. She retired with the rank Sheriff, 491 posts and 0 studs. Like both Elementron and Imaginatrix, she moderated only in the LEGO Universe Forum.

Figmentia left on November 4, 2011, the same day that moderator Elementron was supposedly fired, when the closing of LEGO Universe was announced, then being replaced by PrimeFigulus and demoted to MasterBuilder. Her name in LU was Figmentia, the same as her former Message Board username. 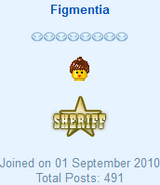 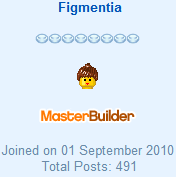 Add a photo to this gallery
This article is complete.
Retrieved from "https://legomessageboards.fandom.com/wiki/Figmentia?oldid=815853"
Community content is available under CC-BY-SA unless otherwise noted.