Source: LEGO Message Boards
legocityfan119 has either deleted their account or their account has been deleted by a moderator
This article is up to date
Userpage on this wiki: Edward Nigma

Legocityfan119 (also known as legocityfan or LCF) is a user who joined the LEGO Message Boards on October 28, 2011. He has the rank Highland Battler, 717 posts, and over 241 likes received. He joined LEGO.com on January 16, 2011, and made his first approved post on December 3, 2011. He was permanently banned from the LEGO Message Boards on August 1, 2014 by Keighlian for being a major contributor in the joint sockpuppet troll Nashtron and all other accounts involved with it. The topic addressing his ban and other users' can be found here. His new account is Wrapped_Enigma. 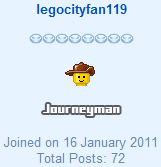 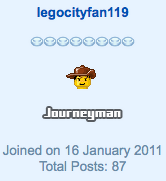 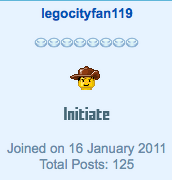 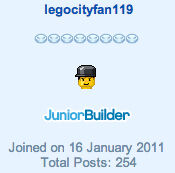 As a Roman Soldier

After being spam liked onto the global likes leaderboard
Add a photo to this gallery
This article is great.
Retrieved from "https://legomessageboards.fandom.com/wiki/Legocityfan119?oldid=869528"
Community content is available under CC-BY-SA unless otherwise noted.