The Bearded Commander of EPICNESS!!!

Source: LEGO Message Boards
TannerJ2598 is currently inactive
This article is up to date
Userpage on this wiki: Tannericus2598

TannerJ2598 is a user who joined the LEGO Message Boards on February 15, 2011. He has the rank Hippie, 49,996 posts, and over 26,737 likes received. He is the author of "Day of the living CHI!" He was interviewed by the moderators here on July 12, 2013. He used to be 2nd but is currently 27th on the all time likes leaderboard. He announced his retirement in April 2014, but still posted quite frequently.

He was the second user to achieve Conquistador, Jester, and Revolutionary Soldier and the first to achieve Royal Guard, Musketeer, and Pirate. He frequently posts in the LEGO Video Games Forum, Castle Forum, Friends Forum, City Role-Play Forum,, and he also discusses video games in the "Munch Munch Cafe" topic. He was a member of the group Raiders of the Lost Band. Tanner once reached over 560 received likes in one day. 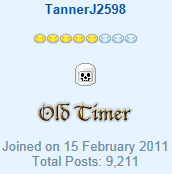 Tanner as an Old Timer 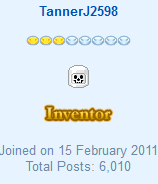 Tanner as an Inventor

Tanner ending his time on the LMBs with exactly 50,000 posts.
Add a photo to this gallery

This article is good.
Retrieved from "https://legomessageboards.fandom.com/wiki/TannerJ2598?oldid=867932"
Community content is available under CC-BY-SA unless otherwise noted.