The Knights of the Olde Speech was a group of users who came together because of their love of talking in Old English. Founded by Talmid, Thingguy2, and Lukey3449, they defended grammar and fight spam. They were mainly active in the LEGO Universe Subforum and Stories of LEGO Universe forums. Their topic has been deleted, however, the organization persists via use of the Fandom wiki and Discord platforms.

The KotOS had a rank system to organize their members. These ranks are listed from low to high. This rank system has been revitalised within their current community to determine discord privileges/provide the community members with shiny name-tags.

The Knights of the Olde Speech Talk Forum 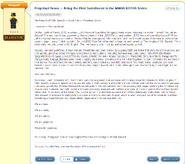 This article is good.
Retrieved from "https://legomessageboards.fandom.com/wiki/The_Knights_of_the_Olde_Speech?oldid=868571"
Community content is available under CC-BY-SA unless otherwise noted.